The members of the Plainsboro Township Community Emergency Response Team (C.E.R.T.) wish to establish that in the effort of community unity and in the spirit of service, we will strive to perform to the best of our abilities. We promote a team approach to problem solving and establish that no one job or individual stands alone. We are a volunteer group who respect and care for each other and the public. By open communication and cooperation among this community's Police, Fire, and Emergency services, we strive to achieve our goal of quality service by helping and supporting this community in the event of extreme emergency, disaster, and terrorist attack and to provide moral support to the citizens of Plainsboro Township. The future is unknown and will present numerous challenges. Therefore a willingness to learn and share knowledge, to think creatively and improve work techniques will ensure our standard of quality community service.

The Community Emergency Response Team concept was developed and implemented by the Los Angeles City Fire Department (LAFD) in 1985. The Whittier Narrows earthquake in 1987 underscored the area-wide threat of a major disaster in California. Further, it confirmed the need for training civilians to meet their immediate needs. As a result, the LAFD created the Disaster Preparedness Division with the purpose of training citizens and private and government employees.

The training program that LAFD initiated makes good sense and furthers the process of citizens understanding their responsibility in preparing for disaster. It also increases their ability to safely help themselves, their family and their neighbors. The Federal Emergency Management Agency (FEMA) recognizes the importance of preparing citizens. The Emergency Management Institute (EMI) and the National Fire Academy adopted and expanded the CERT materials believing them applicable to all hazards.

The CERT course will benefit any citizen who takes it. This individual will be better prepared to respond to and cope with the aftermath of a disaster. Additionally, if a community wants to supplement its response capability after a disaster, civilians can be recruited and trained as neighborhood, business, and government teams that, in essence, will be auxiliary responders. These groups can provide immediate assistance to victims in their area, organize spontaneous volunteers who have not had the training, and collect disaster intelligence that will assist professional responders with prioritization and allocation of resources following a disaster. Since 1993 when this training was made available nationally by FEMA, communities in 28 States and Puerto Rico have conducted CERT training.

We graduated our first class of 30 in early 2005, and the CERT program in Plainsboro was underway, In the following three years another seven classes were completed, bringing the total number of graduates to 154.

Since 2005 our members have taken additional training and have participated in a number of drills and activations, assisting our first responders. We have helped with perimeter control, traffic control, crowd control, building evacuation, manning shelters, assisting at health fairs and hospital open houses, and many other community events.

In September 2012, we ran our ninth CERT class.

CERT is about readiness, people helping people, rescuer safety, and doing the greatest good for the greatest number. CERT is a positive and realistic approach to emergency and disaster situations where citizens will be initially on their own and their actions can make a difference. Through training, citizens can manage utilities and put out small fires; treat the three killers by opening airways, controlling bleeding, and treating for shock; provide basic medical aid; search for and rescue victims safely; and organize themselves and spontaneous volunteers to be effective. 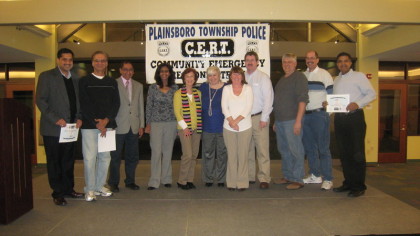 Congratulations to all for completing the   9-week program